COFFEE: Where does coffee came from? Facts 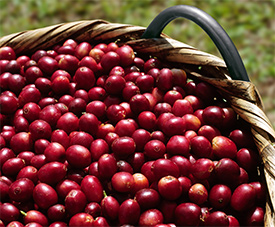 Where does coffee come from?

More than two thirds of the world’s coffee is grown in Latin America in countries like Brazil, Mexico and Guatemala due to the productive volcanic soils that they have.

The first shape of coffee looks like red berries and grows on shrubs, bushes or trees planted at high altitudes in rich soils with lots of rainfall.

According to legend, coffee was first discovered around 800 A.D. by an Ethiopian goat herder. Noticing that his herd had a distinct boost in energy after munching on the red berries of a particular shrub, the goat herder tried them himself and discovered the energizing properties of coffee. It’s also believed that the first people to brew coffee cherries with hot water were monks who relied on the drink to help them stay awake for long hours of prayer and meditation.

Did you know that more than 500 billion cups of coffee are poured around the world every year? Or that Brazil, the world’s leading coffee producer, makes more than 3 times the amount of coffee beans than the next biggest exporter, Vietnam?

PrevPreviousWhat is the right way to taste coffee?
NextOur TeamNext

We love to chat so get in touch.